Recently I caught wind of a local place that held Yabbies, this intrigued and excited me as I had done a *LOT* of Yabbying growing up.  So I quickly sought some yabby drop nets, only to find the place I had visited only had bait trap nets, which would have to be enough, just to see if this place held Yabbies or not.

We bought a couple of bait traps and also some chicken livers and went to see if this place held Yabbies.

And to my surprise, it held a lot of Yabbies…. The first time we went, I had only wanted to see if there were some and not actually catch any to keep.  Though my daughter did talk me into keeping just one Yabby to put in our small fish tank as a pet.

This decision to allow her to keep a Yabby as a pet, has spawned something quite big.  Since that decision the following has happened:

This last point was an interesting one, I had learnt how to sex Yabbies before going Yabbying to catch our ‘pet’ Yabbies, so my main tank had a mixture of males and females with the hope that they would breed.  And breed they have 😀 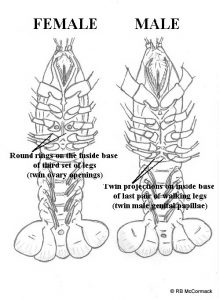 As soon as I found that I had a ‘berried’ Yabby, I put her into a tank of her own, own filter, airstone, the works.  As you can see below, over time the eggs have hatched and the babies form, they actually formed pretty quickly, to today with the two YouTube videos at the bottom.

There was actually nothing different I had to do with the berried female, just pop her in her own tank, give her plenty of food and nature will take care of the rest.  She is still in the tank with the babies for now, as there are some babies still hanging onto her tail.  But as soon as the last baby detaches itself from her, she’s going back into the main 5 foot tank.